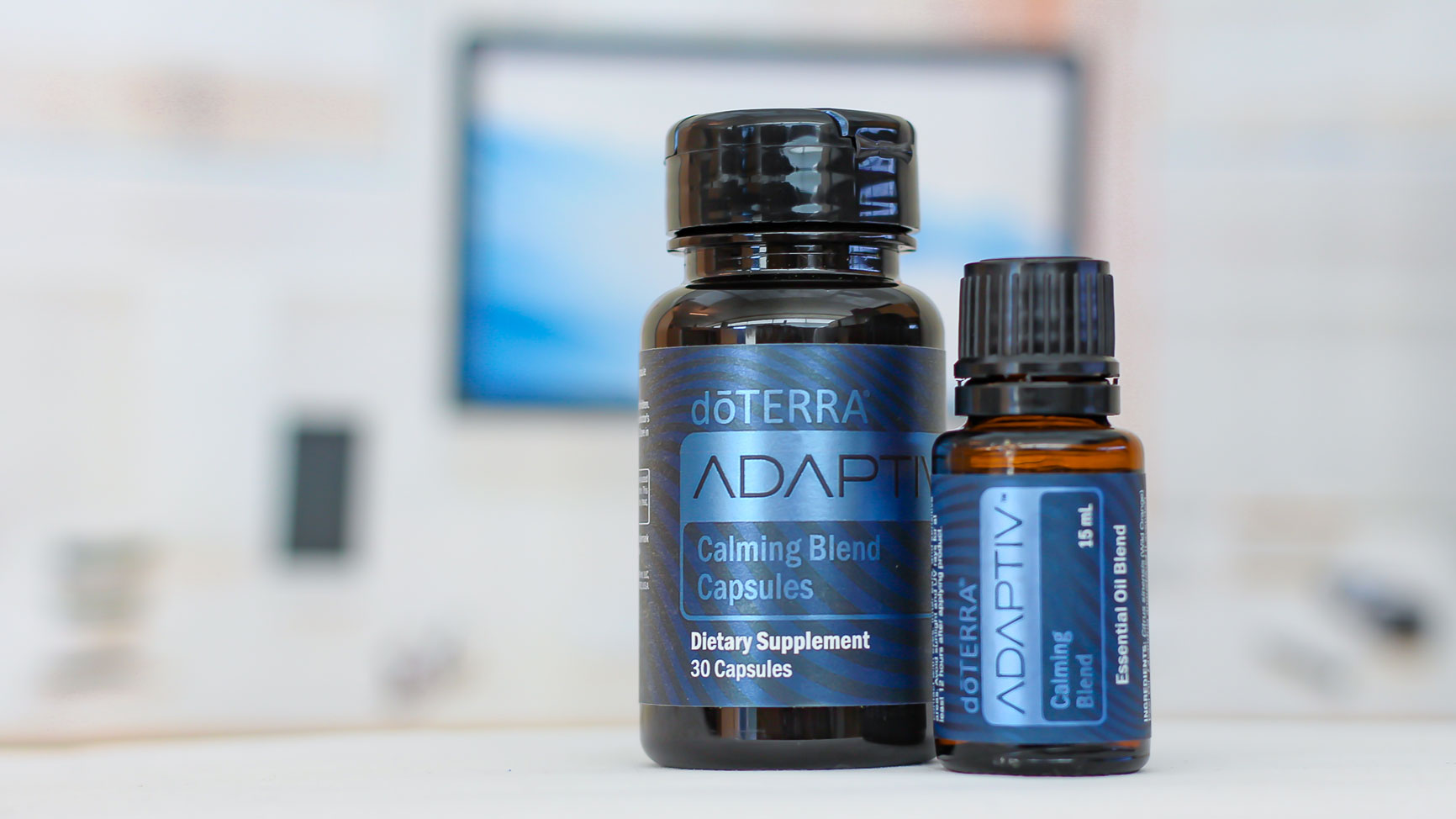 “Calming”, “relaxing”, “reducing feelings of stress”, “promoting uplifting feelings”, etc. are terms commonly associated with the aromatic use of essential oils, and there is quite a bit of research to support those statements. But clinical research regarding the ability of essential oils to help us confront challenges and handle daily stressors—to adapt—is quite limited. At the 2019 Together Convention, Nicole Stevens, Director of Oil Research and Formulation, discussed how her team is changing that with a new proprietary blend and several innovative (albeit stressful) clinical trials.

The Adaptiv™ Calming Blend is the result of years of research and formulation. The final product is supported by clinical research conducted by doTERRA’s very own team of research scientists. In preparation for launch of the new Adaptiv line of products, doTERRA’s global campus was abuzz with science as multiple clinical trials were ongoing. The Adaptiv essential oil blend trial was a landmark case for doTERRA’s clinical research team; it involved a larger number of doTERRA scientists (over 10) than any previous in-house trial, it was the first involving psychological elements (stress), it included the youngest study participants in any doTERRA trial (as young as 12), and it investigated something we all face: STRESS.

We Will, We Will…STRESS YOU

Participants in the Adaptiv trial were only told that they would be testing a new doTERRA product and that they had to first qualify to be a product tester by taking two assessments. Participants were randomized and put into two separate rooms, one where Adaptiv was being diffused and the other where a placebo was being diffused. To the horror of the participants, the assessments were a combination of math and word problems that progressively increased in difficulty. There were 15 questions in total with a time limit of 12 minutes. Furthermore, a countdown clock was projected onto the wall in each room. After completion of one assessment, participants would cross over, go into the opposite room and take the other assessment. Throughout the course of both assessments, each person wore a pulse oximeter to monitor their heart rate and a temperature strip on the forehead to measure autonomic response to the stress-inducing environment. Following the assessments, all participants answered a series of questions regarding how they felt throughout the test.

What Did We Find?

The results surprised even those who were involved in formulation of the Adaptiv blend. Although final statistical analysis is currently under way, some trends were clear from the initial data. Nicole Stevens noted one such trend during her 2019 Together Convention presentation. In reference to the test scores, none of which was very high considering the level of difficulty of the test, many participants still scored higher when undertaking the test in the Adaptiv room. Also, with Adaptiv diffusing, average heart rates were lower and more consistent.

Most interesting were the subjective assessments. There are objective physiological markers of stress (i.e. heart rate, blood pressure, etc.), but stress is also psychological; if you feel less stressed…well, you are less stressed. Participants self-reported having lower levels of stress and anxious feelings when taking the assessment in the Adaptiv room, even though they had no idea what room they were in or what was being diffused. There was also a small subset of participants who were taking part in an extended clinical trial involving the Adaptiv™ Calming Blend Capsules. Those specific participants reported the lowest stress levels of all. Considering the products were formulated to be used together, that possible synergy between the oil blend and supplement was exactly what we were expecting (and hoping) to see.

Don’t forget, the study participants volunteered because they were told they were going to be product testers, and we weren’t about to let them down. Following the testing portion, participants were presented with three separate blends and asked how they liked each blend and how it influenced how they felt. The real Adaptiv was the clear winner, with most participants rating it 8 or 9 (on a 1–9 scale). To complete the product test, participants were asked to come up with a description of how smelling all three essential oil blends made them feel. Remember, they had not been told what the name of the product was, which of the three was Adaptiv, or what Adaptiv’s intended benefit was. The words calm, content, positive, and happy came up repeatedly.

The evaluation of the Adaptiv product line didn’t end with this stress-inducing clinical trial. doTERRA scientists were also busy investigating how effective the oil blend was in an institutional environment, conducting an 80-participant clinical trial on the supplement, and working with our research partners on a proteomic evaluation of how the capsules affected brain cells on the molecular level. All the data is currently undergoing final statistical analysis and will hopefully be published in a scientific journal for general public consumption in the near future. Don’t forget to follow doTERRA science on social media for updates on publication.

The Adaptiv Calming Blend is the precise solution to help you deal with the stressors of everyday life. Whether it’s a difficult test or just normal life, put a few drops of Adaptiv in the diffuser to induce feelings of calm and relaxation, and help the body and mind stay balanced.