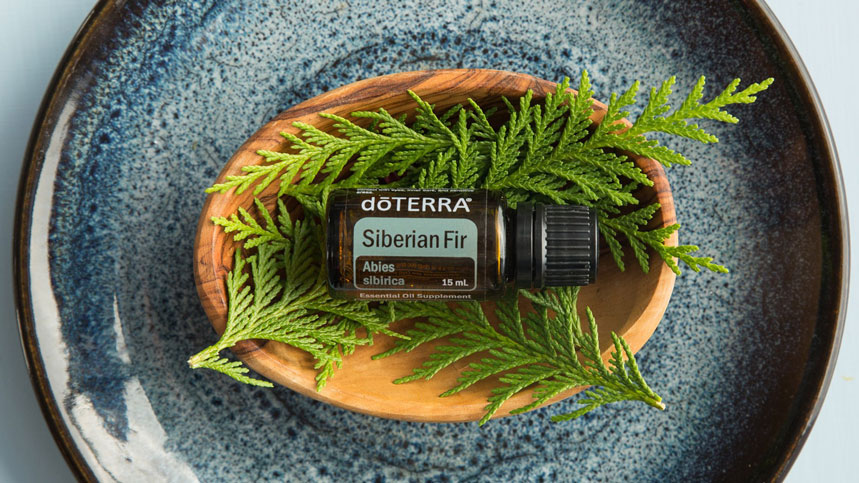 Siberian Fir essential oil is obtained from the needles and twigs of Abies Sibirica, a conifer native to northern regions of Russia. Many Siberian Fir trees live over a hundred years, despite intensely cold temperatures of below -50 degrees Fahrenheit.

Fir tree oils are a great example of the difference between chemical diversity and chemical dominance. Chemical diversity refers to the different compounds present in an oil. Because all of the fir tree oils are mainly composed of the same nine compounds, they share the same diversity of chemical constituents. However, there are only three dominant constituents in each oil. The chemical dominance—the compounds found at the highest concentrations—of each fir tree oil is completely distinct from the other two offered by doTERRA. For example, Siberian Fir essential oil contains high concentrations of bornyl acetate, camphene, and alpha-pinene. On the other hand, Douglas Fir is primarily composed of beta-pinene, sabinene, and terpinolene, while White Fir mostly consists of bornyl acetate, alpha-pinene, and limonene.

Because of the difference in dominance, the three fir oils smell very different. Douglas Fir has a bright, almost citrusy smell with fewer of the deep pine notes. White Fir is light, airy, and piney without being sharp. Siberian Fir is intensely pine with some sharpness.

Because of the similarity in chemical diversity, the fir oils have similar benefits. However, differences in chemical dominance mean that each oil is specialized for a particular form of use. Take Siberian Fir, for instance, with its primary compounds being bornyl acetate, camphene, and alpha-pinene. Camphene is known for having properties that help promote clear healthy breathing.1 Bornyl acetate affects the pigment of the skin.2 Daily topical application of essential oils high in bornyl acetate may actually help lighten the skin tone.2 Alpha-pinene is calming and relaxing, and it exerts its effects by acting on GABA receptors*.3

Due to its chemical composition, Siberian Fir has many potential uses:

With the new announcement that doTERRA will no longer be offering White Fir oil, it is comforting to know that Siberian Fir is actually an upgrade from White Fir. GC-MS analysis shows that all of the main chemical constituents of White Fir are also present in Siberian Fir, and in even greater concentrations, with one exception: limonene. While White Fir oil contained fair amounts of limonene, it is important to realize that the benefits of limonene are not lost with the loss of White Fir. Limonene is found in much higher concentrations in the citrus oils. In fact, it turns out that a 2:1 blend of Siberian Fir to a citrus oil, especially Lemon or Lime, has chemical makeup nearly identical to White Fir oil. Unlike White Fir, Siberian Fir can be used internally.

In summary, Siberian Fir is a powerful new oil with many uses and experimentally-supported benefits. It is chemically superior to its predecessor White Fir, and it is also more useful because it can be used internally. We are confident that you will love this new oil.