You will now be directed to the enrollment form. For your security you will be logged out of your account as you enroll this new member.
Yes, Continue Enrollment
Not Right Now
TARGETED WELLNESS Get hassle-free wellness delivered straight to your door! Learn More

Say goodbye to hassle and hello to simple, effective, targeted wellness delivered right to your door. Choose which health category is most urgent to you—Immunity, Mind & Mood, or Relief—and receive a special kit each month that’s filled with products specifically tailored to your goal. It’s really that simple.

Available for LRP orders. Limit of four per account each month.

doTERRA holiday products are launching November 2, 2020. Get a sneak peek at this year’s products and make sure to mark your calendar so you don’t miss out on these magical items!

This month, place any 200 PV order, and we’ll give you a complimentary gift of some of our most incredible products, which you can reach for when you need a little relief:

Available all October with any 200 PV order while supplies last.

15% OFF All October, enjoy 15% off doTERRA Rose Touch while supplies last! Learn More

This October, feel rejuvenated with our luxurious doTERRA Rose Touch. 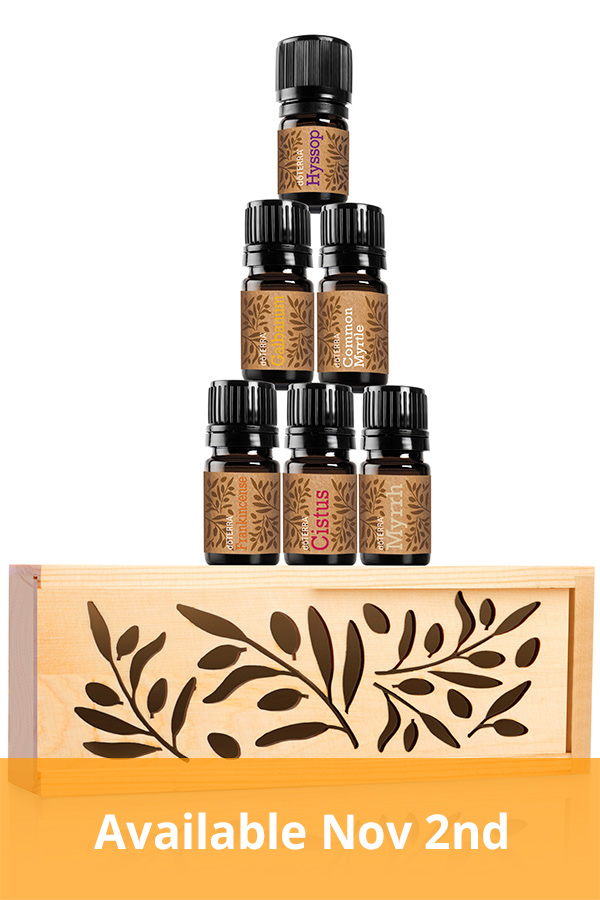 The doTERRA Ancient Oils Collection is inspired by the contours, cultures, and peoples of the distant past. The Collection comes in a beautifully designed, natural wood box and includes six essential oils used by the most important people in the world as for their health benefits and to improve wellbeing in ancient times—CPTG® Myrrh, Frankincense, Galbanum, Hyssop, Cistus, and Common Myrtle.

From the shifting sand of the Sahara to the expanse of primeval forests and unending blue skies, the doTERRA Ancient Oils Collection is inspired by the contours, cultures, and peoples of the distant past. The collection includes six essential oils used by the most important people in the world as for their health benefits and to improve wellbeing in ancient times. Take pleasure in these captivating oils.

Myrrh Commiphora myrrha 5 mL: Ancient records show that Myrrh was deemed so valuable that at times it was valued at its weight in gold. Myrrh has been used throughout history in perfumes and religious ceremonies, and for its internal and external health benefits.

Frankincense Boswellia carterii, Boswellia sacra, Boswellia papyrifera, Boswellia frereana 5 mL: In addition to its notoriety in the New Testament, the Babylonians and Assyrians would burn Frankincense in religious ceremonies and the ancient Egyptians used Frankincense resin in everything from perfume to salves for soothing skin.

Galbanum Ferula galbaniflua 5 mL: Egyptians used Galbanum for incense and embalming. The Roman and Greek civilizations used it in beauty products and perfume. Hippocrates used it for its other benefits. Galbanum was even mentioned in the Bible.

Hyssop Hyssopus officinalis 2.5 mL: Hyssop, a member of mint family, was regarded by both the Greeks and the Hebrews as a sacred herb. It is mentioned several times in the Old Testament and is known as one of oldest herbs used by human beings.

Cistus Cistus ladaniferus 5 mL: Also known as Rock Rose, Sun Rose, Rose of Sharon, and Labdanum, use of Cistus for perfume and incense was known in Biblical times. For centuries, Cistus has been used during meditation and for other benefits.

Common Myrtle Myrtus communis 5 mL: Common Myrtle, also known as Corsican pepper, has been used for thousands of years as a symbol of love, honor, happiness, and generosity. Its benefits were well known as early as 600 B.C. In the Bible, it was used in purification ceremonies.

Diffusion: Use three to four drops in the diffuser of your choice.

Topical use: Apply one to two drops to desired area. Dilute with a carrier oil to minimize any skin sensitivity. See additional precautions below.

Possible skin sensitivity. Keep out of reach of children. If you are pregnant, nursing, or under a doctor’s care, consult your physician. Avoid contact with eyes, inner ears, and sensitive areas. Galbanum, Hyssop, Cistus, Common Myrtle: Not for internal use.