doTERRA’s sourcing of essential oils from India is integral to the pursuit of purity. Home to over 1.3 billion people across 28 states and 8 union territories, India is rich in cultural, religious, and natural diversity. Livelihoods in rural India are primarily based on agriculture and associated sectors, with over 70% of rural households primarily dependent on farming income. Our emphasis on best agricultural practices, fair and on-time payments, and expanded market opportunities contribute to higher incomes and improved livelihoods. 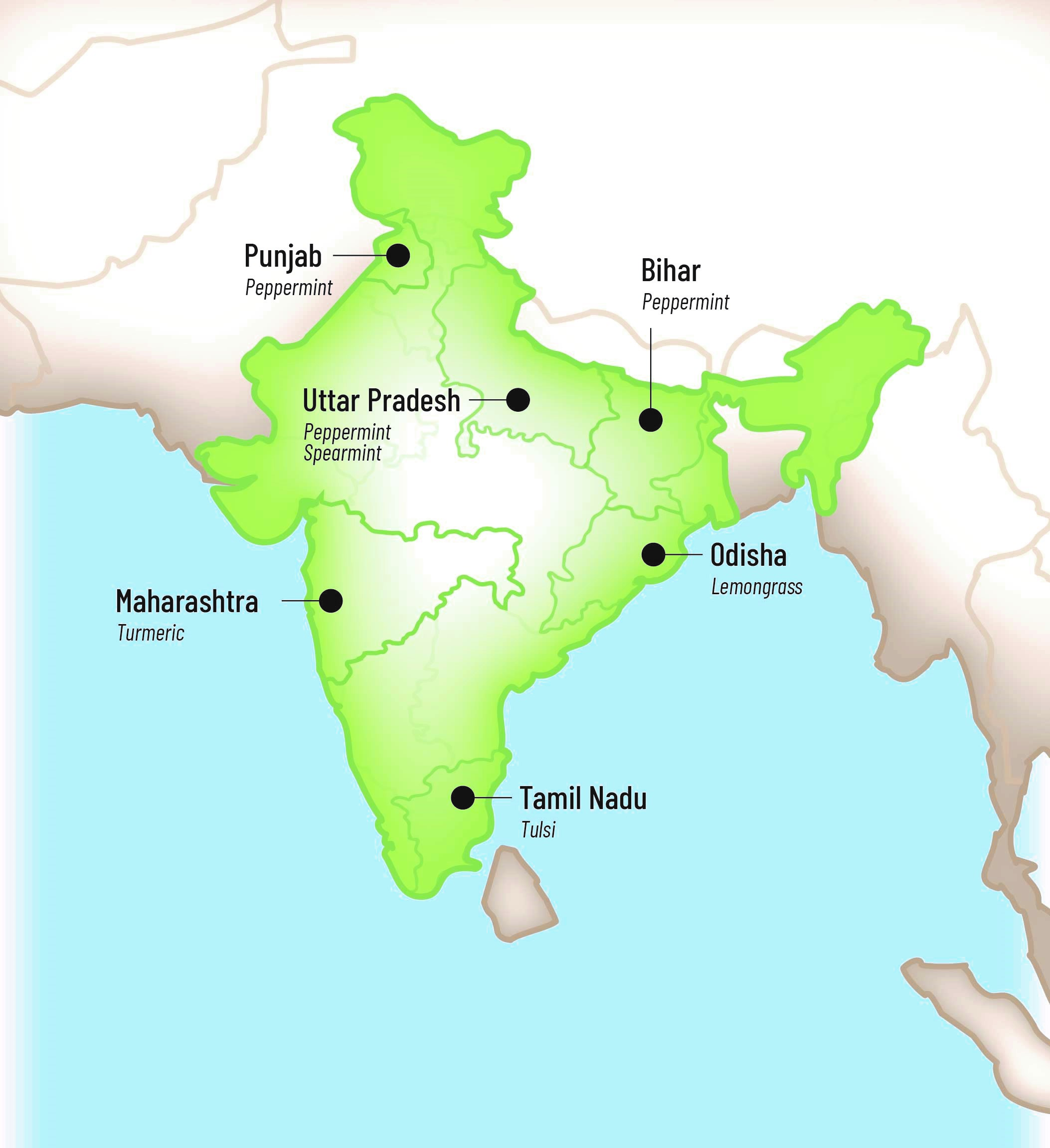 In the states of Uttar Pradesh and Punjab, located in the north of the country, thousands of farmers grow and harvest Mentha piperita, commonly known as peppermint. dōTERRA’s demand for pure and natural peppermint oil is unique in the market. Most companies target a certain price point or chemical profile, which often results in other mint species being substituted for or blended to create a “peppermint” profile. By refusing to accept this common practice, dōTERRA ensures that we support these farmers to continue their production of true Mentha piperita. Together with our sourcing partner and Farms and Farmers, we have been working for years to scale up peppermint nurseries, plantations, and advisory services to a select group of farmers in Bihar, one of the poorest states of the country. Our aim has been to help these farmers increase their revenues and profit margins through peppermint production so they can further invest in their farms, families, and communities. After initial setbacks due to extreme weather, this project has taken hold and is inspiring additional farmers, especially younger generations, to add peppermint to their annual crop rotation.

Farmers will often grow spearmints for 5 months, harvest, and then plant rice, wheat, or mustard during alternating seasons. By rotating crops like this, farmers typically increase their income by as much as 40% per year. Following the harvest, nearby community distillation units distill the spearmint for eight hours. The post-distilled biomass is then dried out and reused to fuel the distillation boiler, a proven sustainable practice. Farmers then take their oil directly to our sourcing partner for purity testing and can be paid within an hour.

Turmeric, a rhizome or underground stem from which roots grow, is typically dried, ground up, and used as a spice. Cultivating turmeric alongside corn, sugarcane, and other crops provides nutrients and serve as a natural weed and pest management system for the soil. Sugarcane planted in soils following turmeric often have a significantly higher yield as well, contributing to additional income-generating opportunities. Both men and women harvest turmeric, but women are typically responsible for cleaning and then sorting the turmeric rhizomes into various grades based on size and application—the fresh market or for further processing. Our turmeric essential oil is a proprietary blend produced through steam distillation of both fresh and dried rhizomes. This blend gives our Turmeric oil both a unique aroma and chemical profile.

Holy Basil, or Tulsi in Hindi, is wild-harvested in the southern Indian state of Tamil Nadu. It is one of the most frequently used medicinal herbs in India and is also named the “The Incomparable One.” The optimal harvesting season is between January and February and the harvested crops typically need to be distilled within 72 hours to obtain the highest oil yield. Harvesters only cut the upper part of the plant and preserve the roots for the next season. Our sourcing partner has been working with smallholder farmers to establish small-scale cultivation and implement sustainable harvesting practices to ensure the sustainability of this sacred plant.

Most of the farmers in the Mayurbhanj district of Odisha, an eastern state on the Bay of Bengal, are from a tribal population. Farmers in this area of Odisha have historically only been grown one crop, rice paddy, which typically does not provide a substantial income. Most of these farmers did not know of a viable cash crop that would be suitable for their land.

In 2015, a small number of enterprising farmers began working with Farms and Farmers on a pilot lemongrass project. Through coordinated efforts between these farmers, dōTERRA, our sourcing partner, and Farms and Farmers, some unused, barren tribal land was cultivated with lemongrass. Due to limited crop management knowledge and only a single inefficient distillation unit in the area, farmers and distillers were only producing around 40% of optimal oil yields. To overcome these obstacles, we funded Farms and Farms to offer a targeted training program for local farmers to improve and scale up their production. We also donated the funds to build a new, efficient lemongrass distillery. Consequently, smallholder farmers, particularly women involved in the project, have increased their income by as much as five times.

Angel’s Place provides a safe home for over 160 orphaned and destitute children in Manipur, India along with educational and recreational opportunities. In 2008, Angel’s Place acquired 172 hectares (about 425 acres) of land in the hills of Manipur for lemongrass to generate income for the children’s home and to provide employment opportunities for the local community. dōTERRA’s purchase of lemongrass essential oil from the farmers working with Angel’s Place ensures fair market demand and profitability, which enabled the construction of a classroom for the children to receive vocational training in tailoring. 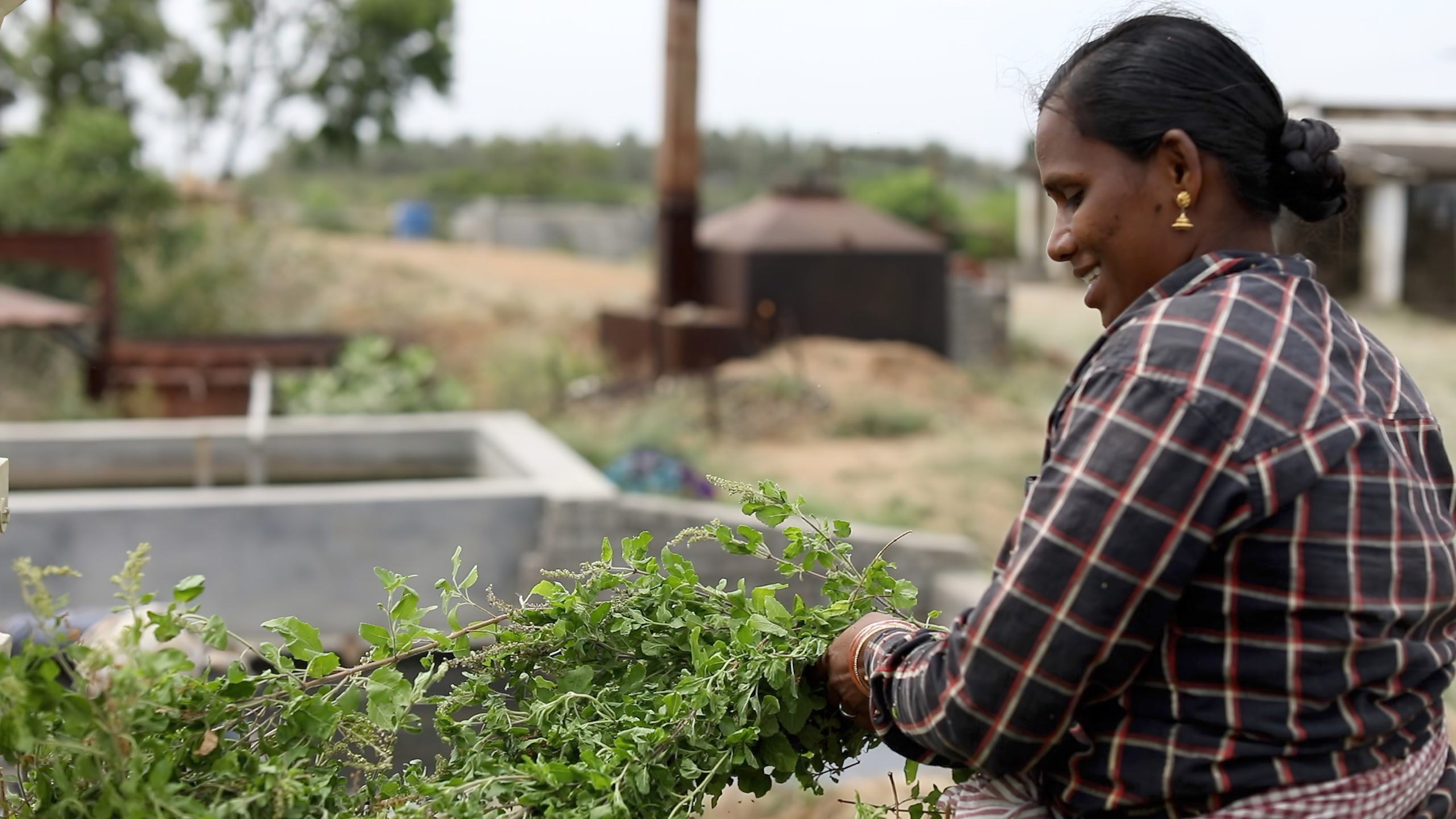 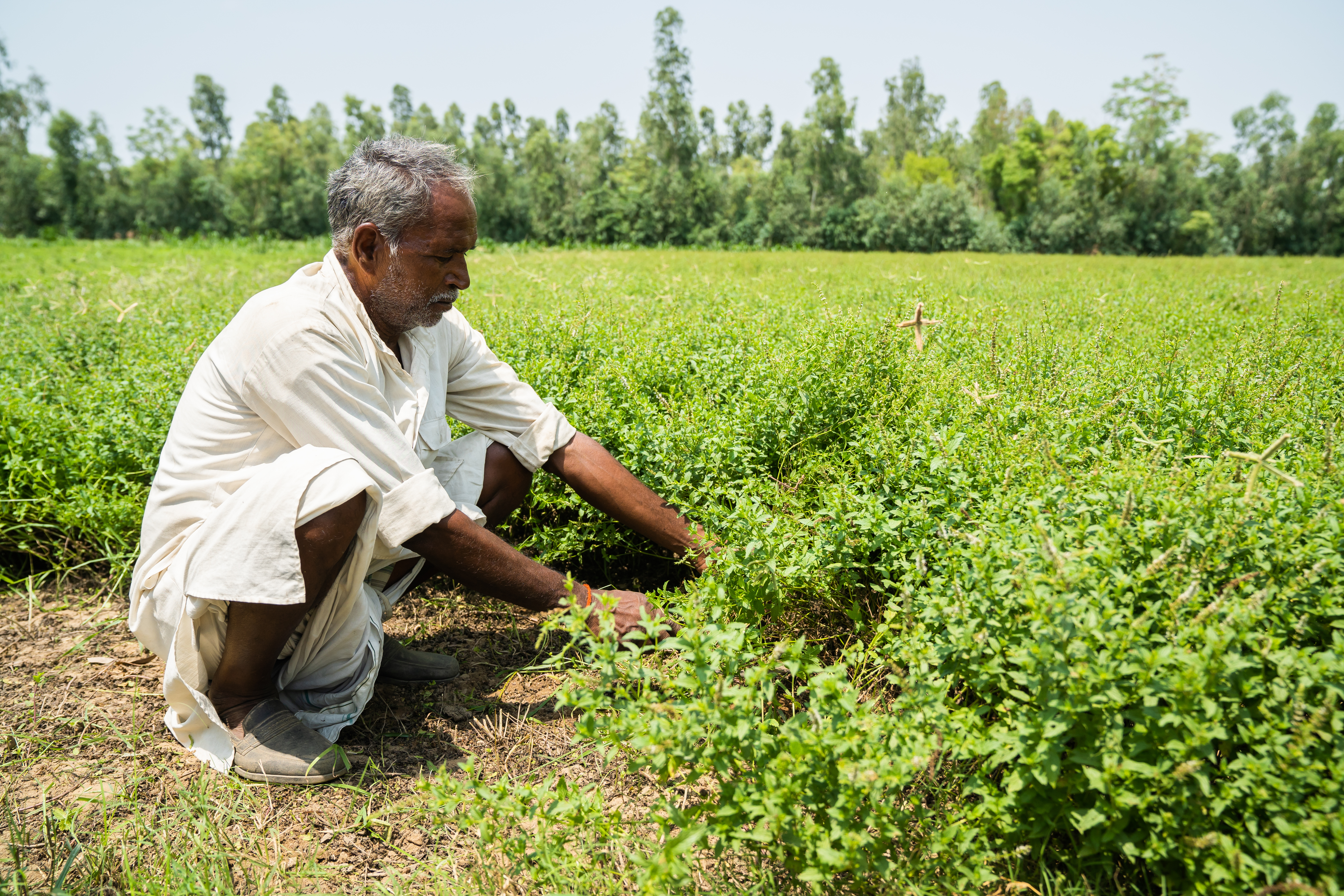 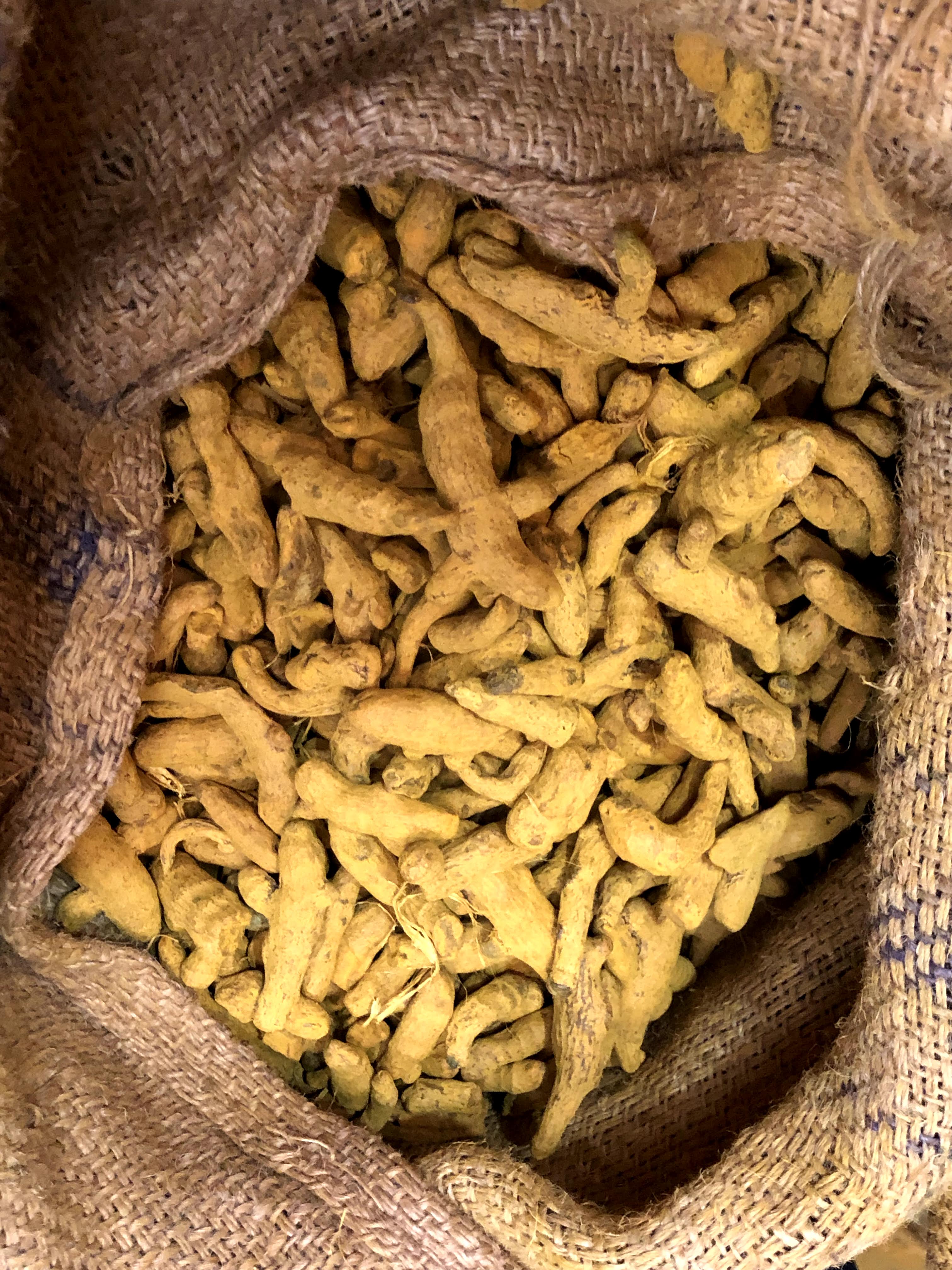 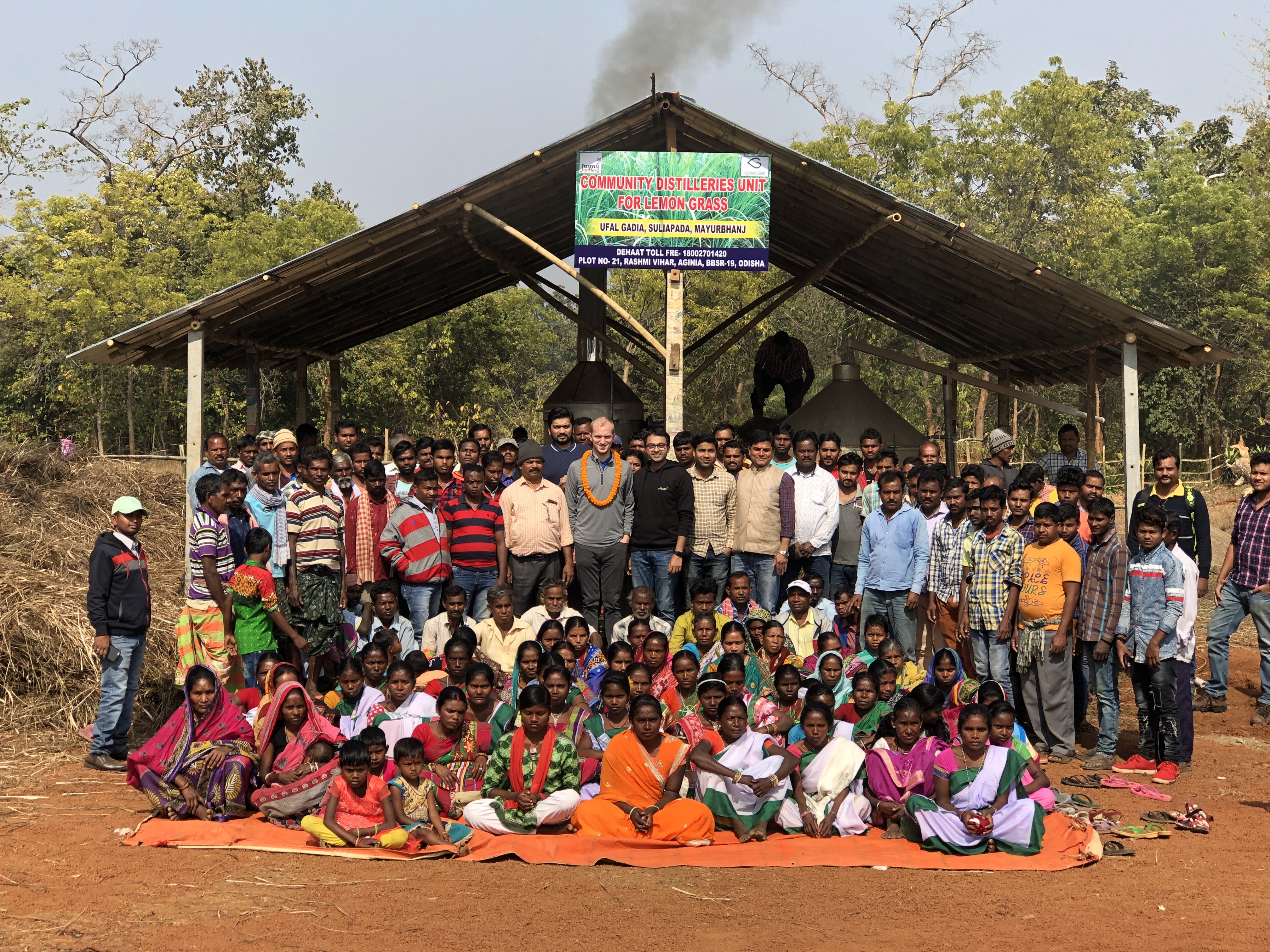 doTERRA Healing Hands Foundation has partnered with communities in sourcing areas and has supported projects including updating a high school washroom for girls and working with Days for Girls for distribution of 500+ kits in Odisha.

A partner NGO, Farms and Farmers, and our sourcing partner help smallholder farmers improve their livelihood by increasing their income from agricultural activities. The impact from this partnership includes:

Through dōTERRA’s investment, Farms and Farmers has provided new distillation units in the states of Bihar and Odisha to ensure that farmers have access to value- adding technology near their farms. These new distillation units have reduced the burdens of travel for farmers, which allows them to maintain a higher profit margin on their final sold product. Because of dōTERRA’s increasing demand, dōTERRA can support over 30,000 farmers in India.