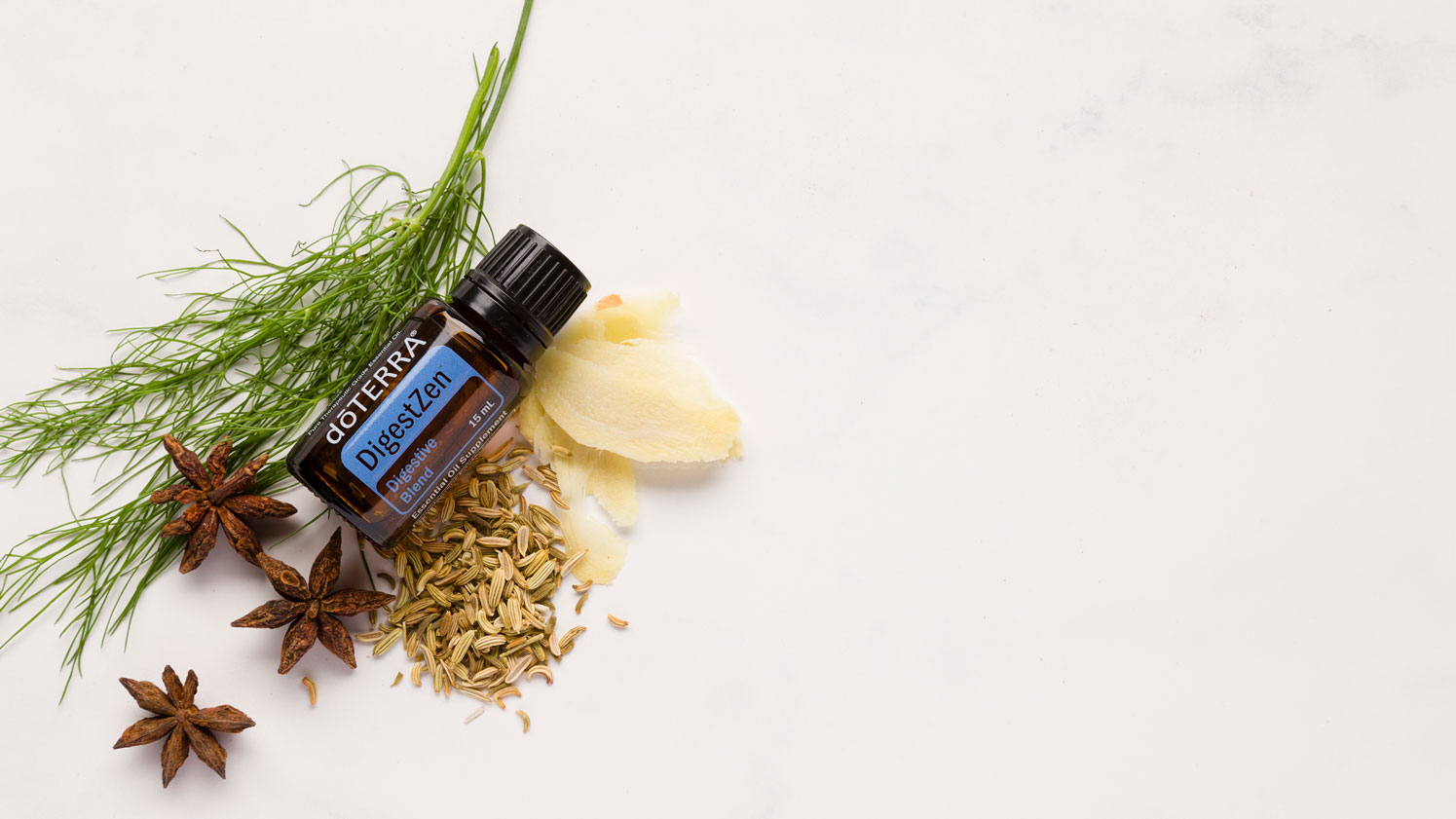 The digestive tract is one of the body systems that research has shown to be most positively influenced by essential oils. Being the most innovative and science-focused company in the essential oil industry, doTERRA combined the most efficacious oils for digestive health support into one amazing blend: DigestZen Digestive Blend. Whether used to address acute discomfort or to support overall wellness, the proprietary combination of anise, peppermint, ginger, caraway, coriander, tarragon, and fennel essential oils is the perfect complement to your digestive health regimen.

Oils in the Blend

The formulation of DigestZen was based on a combination of historical use and modern science. Individually, all the included essential oils have a long history of use for a variety of digestive concerns and a breadth of modern research to support the historical use.

Extracts of the Pimpinella anisum (anise) plant were often combined with fennel in cake by ancient Romans, who would consume the cake after large meals to ease digestive discomfort. Composed primarily of anethole, clinical an d experimental research have shown that anise essential oil may support the health of the digestive tract and promote relaxation when taken internally1,2.*

Peppermint oil does everything from support feelings of clear breathing to clean surfaces, but its most scientifically researched benefit may be related to its ability to support digestive health. Human clinical research has shown that internal consumption of peppermint essential oil supports healthy digestive system function as well as reduce occasional digestive issues such as gas and bloating3,4.*

Various extracts of ginger have been used in its native China, throughout Asia, Africa, and the Caribbean for centuries for a variety of digestive concerns, but research suggests that it may be the essential oil that is the most efficacious. With its high concentration of sesquiterpenes, specifically α-zingiberene and beta-sesquiphellandrene, ginger essential oil has been shown to support healthy digestion and reduce feelings of occasional nausea5,6.*

Steam distilled from the seeds of the carum plant, which is in the same botanical family as anise and fennel, caraway essential oil is another substance with a long history of use for digestion. Likely due to its rich concentration of carvone, caraway essential oil has been shown in clinical research to help maintain gastrointestinal health when taken internally, especially when combined with peppermint7.*

Coriander seed is one of the world’s oldest know spices, having been used for culinary and health purposes by the Babylonians. The essential oil steam distilled from the coriander seed is high in linalool, a terpene most often associated with floral oils, which lends to its gastrointestinal health supporting properties. When taken internally, coriander has been shown to support a healthy gastrointestinal tract8.*

Tarragon is an herb that is used extensively in traditional Ayurvedic and Chinese health practices specifically to ease gastrointestinal discomfort. Depending on the source, the composition of tarragon essential oil can vary, but it is always rich in phenylpropenes and monoterpenes, particularly limonene and alpha-pinene9. Clinical research suggests limonene and alpha-pinene may be supportive of gastrointestinal function when taken internally10,11.*

Fennel may be the essential oil with the most extensive historical use for digestive health.* What’s interesting about fennel is that the aroma also may be supportive of digestion. Experimental research has shown that inhalation of fennel essential oil may impart a calming and invigorating effect12.