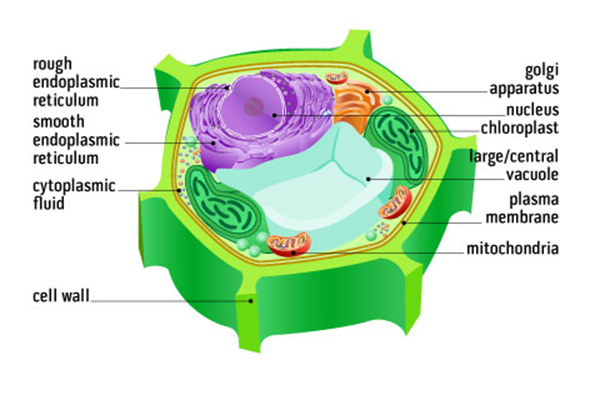 Cells are the foundational units of every living organism’s structure and reproduction. One function of the cell is to produce primary metabolites (nucleic acids, proteins, carbohydrates, and lipids) needed for survival. Inside of every cell are organelles (differentiated cellular structures that serve specialized functions). The structure of the cell and functions of various organelles of the plant cell are described in detail below.

The inside of a cell contains two main parts: the cytoplasm and the nucleus. Both parts are contained inside of the plasma membrane, a network of proteins and lipids that form the outside boundary of the cell and determine what materials are able to enter or exit. Unlike animal cells, plant cells also have a rigid cell wall composed of cellulose surrounding the plasma membrane. This wall keeps excess water from inappropriately entering or exiting the cell, allowing water balance to be maintained. The nucleus contains DNA or the “blueprint” for making proteins. The cytoplasm houses all other organelles including the endoplasmic reticulum, ribosomes, Golgi apparatus, mitochondria, chloroplasts, and vacuoles. Each organelle serves a uniquely specialized function that contributes to the overall functionality of the cell.

The endoplasmic reticulum (ER) has two parts; the smooth ER and the rough ER. The smooth ER makes lipids and modifies the structure of some carbohydrates. The rough ER got its name because of the ribosomes that dot its surface. Ribosomes are tiny spherical organelles that assist in protein synthesis by reading RNA and then translating it to protein. Ribosomes can be found both attached to the ER or floating free in the cytoplasm. The rough ER serves as the main site of synthesis and assembly of proteins that are sent out of the cell. Everything made in the ER moves to the Golgi apparatus to be stored, modified, packaged, and shipped out of the cell or to other locations within cellular membranes. The smooth ER and the Golgi apparatus are the sites within a cell where essential oils are made.

Each plant cell contains dozens of mitochondria—organelles referred to as the “powerhouses” of the cell. Mitochondria contain the equipment needed for generating usable energy from food (described in further detail in the next section, Plant Metabolism). The mitochondria are the only organelles aside from the nucleus to contain genetic material. This genetic material is a set of simplified DNA and ribosomes and is used to produce special enzymes needed for energy production.

Plants also have some unique organelles different from those found in the cells of animals. For example, plants have large central vacuoles. The vacuoles store water and waste products, help the cell maintain its shape, and detoxify harmful substances. Another organelle found exclusively in plants is the chloroplast. Chloroplasts contain green pigments that give plants their characteristic color and are also the site of photosynthesis. Even plants that do not undergo photosynthesis contain chloroplasts.

Although each part of the cell plays a distinct and independent role, the pieces make up a cohesive whole that is the basis for all life.