Chemistry is the backbone of life on earth and is intricately involved in the world around us. If you have ever seen water boil or freeze, watched leaves change color in the fall, or washed your hands with soap, then you have experienced chemistry first hand. Often times, people have a negative association with the word “chemical, ” thinking it must be something bad or unnatural. In reality, all matter is composed of chemicals! These chemicals are what allow a substance to retain its properties, react to its surroundings, or induce physiological responses. In terms of essential oils, the chemical profile is what determines the oil’s mechanism of action and function in the human body.
Chemistry may seem overwhelming, even daunting, to those with no formal scientific training; however, the overall complexity of this subject should not inhibit anyone from delving into the chemical world. A fundamental knowledge of chemistry allows us to understand the characteristic properties of the different classes of essential oil constituents and in turn, enhance usage protocols, substitute alternatives as necessary, and ensure safe handling and application. The benefits of understanding chemistry basics cannot be overstated and will be an invaluable tool along your journey of essential oil usage. 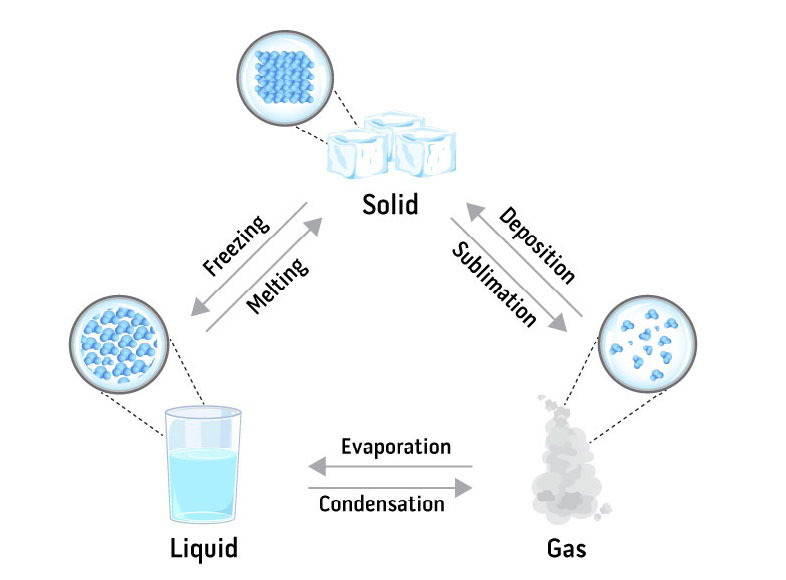 Everything in the world and the universe is composed of matter, which by definition is anything that takes up space, has mass, and can be perceived by the senses. Three main phases of matter exist: solid, liquid, and gas. The phase a substance assumes is determined by the energy of its atoms, which in turn determines how much the atoms can move. In the solid state (lowest energy), atoms cannot move freely so substances in this state have a fixed shape and size. In the liquid state (medium energy), atoms have limited movement so substances in this state are able to flow to fit the size and shape of their container. In the gaseous state (highest energy), atoms are freely moving and fill the space in which they are contained. Adding or removing heat from a substance changes the energy of the atoms, and in turn can cause the phase of the substance to change.

Water can be used to demonstrate the states of matter. At temperatures below 0 °C (32 °F), water is in its solid phase, more commonly known as ice. Because of the low amount of energy in the water molecules at this temperature, the molecules stick together in a solid mass. You can see this by looking at an ice cube—even if it is dropped into a glass of water, it will retain its shape and size. As the temperature increases above 0 °C, the ice melts (changes phases) and becomes water. Water is no longer solid, as evident when a glass of water is spilled. Instead of retaining its shape, the water will move to fit its container, or in this example, spread across the surface upon which it was spilled. If the temperature reaches 100 °C (212 °F), the water will boil (change phases) and become steam. This is evident when water is boiled on the stove. The water level will decrease over time as water molecules evaporate into the air, thus filling their container (the kitchen). It works the same in reverse order as well; if the temperature is decreased, steam will condense (change phases) into water. If the temperature is lowered below 0 °C, the water will freeze (change phases) into ice.